There are many versions of how George became a Saint, the meaning of his name, where he was born, where he died, and the connection to a dragon. Whichever version is presented there is no doubt that he epitomises chivalry, faith, and the protector of good over evil which must surely offer excellent credentials for the title of a Patron Saint.

Some records say the name George is derived from Zeus Georgos from Ancient Greek who was worshiped as the God of Crops. Another version says it could be from ‘gerar’ that is holy, and ‘gyon’ which means wrestler thus foretelling the battle with the dragon.

The  LIFE of  ST. GEORGE

One of the many theories of his background follows as an abridged version:

It was thought that he was born into a Christian family of noble birth in Lod, Syria.  His exact date of birth is not recorded so the above dates are an approximation.    His father was supposedly a successful Roman Officer from Cappadocia  named Gerontius who died when George was fourteen and soon after this loss it was followed by that of his mother. He followed his father in becoming an officer under Diocletian in Nicodemia earning the Emporer’s respect inspite of being a  committed Christian.  But soon a conflict of religion emerged as the teachings of Christianity spread throughout the Roman Empire threatening the old order and undermining Roman Law.  This defiance compelled Diocletian to issue an edict in AD303 that all Christian soldiers should be arrested.  George rejected the edict. Diocletian could not sway him from his belief and so, with great sorrow, he had no alternative but to execute him.  After his death his body was taken to Lydda in Palestine where it became a shrine in honour of his martyrdom.  In 494 he was canonised as a Saint by Pope Gelasius.  By the 4th Century the veneration of St. George had spread right across Europe.

Elsewhere there are dedications to St. George in Syria, Mesopotamia, Egypt, and Thessalonika that date from the 4th Century.

St. George has been venerated by many faiths including Churches in Europe and other different faiths from the Middle East. A most popular saint whose influence has spread across Continents so that he is revered not only in England but also in Romania, Bulgaria, Georgia, Greece, India, Iraq, Lithuania, Palestine, Portugal, Serbia, Ukraine, and Russia.

He is not only the protector of the City of London but other cities such as Genoa, Beirut, Rio de Janeiro, Barcelona, Freiburg, Lod, Moscow and the Island of Gozo.

The history of the flag is said to date back to the 12th Century when the merchant ships of England and the City of London flew a red cross on a white background in order to gain the protection of the Genoese when entering the Mediterranean.

It was in 1346 at the Battle of Crecy that King Edward III decreed that his men-at-arms identify themselves by the wearing of the colours of St. George.  This official order was also extended to all the King’s ships. 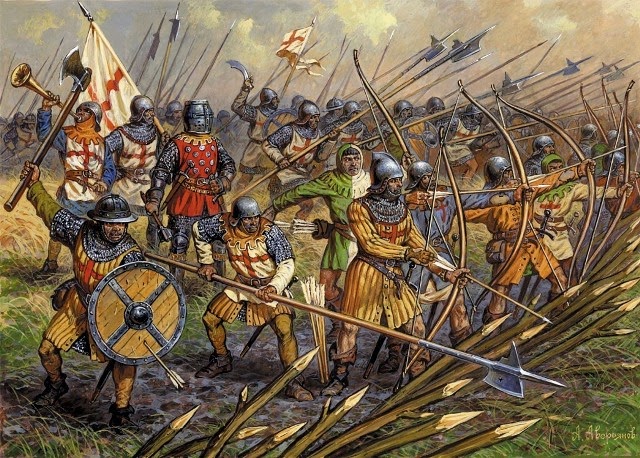 At the time of the Crusades the Pope ordered the English to be distinguished from the other Knights by wearing this flag and so by the Middle Ages it eventually became adopted as the National flag.

The proportions of the flag have been described as 3:5 with the Cross being one fifth of the height of the flag wide.  The heraldic description  being – Argent, a cross gules.

The association with The Dragon can be found in the Legenda Aurea which was compiled by Jacobus de Voragine in 1275 and translated into English by William Caxton in 1483.  The following is an abridged version of Paul Halsall’s compilation (Fordham University in New York).

According to the Legenda a dragon inhabited a swampy area called Selena in Libya.  To keep the dragon from devouring and terrorising the local population they fed it with live sheep.  The day came when it appeared this was not sufficient so the Elders decided only a human sacrifice would do.  Lots were drawn and it fell on the youngest daughter of the King.  Despite his protestations the people were adamant that this young Princess should be offered up.  She was then clothed as a bride and led into the swamp and left.  After a few days it so happened that St. George rode by and on hearing her story determined that he should stay and protect her.

The dragon duly appeared, St. George quickly charged the snorting monster and lanced it, leaving it wounded. He leapt from his horse and urged the frightened maiden to release her garter with which he then bound the monster and cut off its head. The King was so overcome with joy at his daughter’s escape and so relieved were the people at being delivered of this horror they gave up their previous lives and converted to Christianity.

One of the earliest pictorial references to this deed is on an old Roman tombstone in the church of St. Peter in Conisbrough, by Doncaster, Yorkshire. The Roman name of this site was Camulodunum and, it seems, Christianity was first recorded to have reached here in 627 when Edward of Northumbria was baptised at York on the eve of Easter.

The date of the death of St. George coincides with that of William Shakespeare who also died 23rd April, in 1616.

St. George is also the Patron Saint of the Most Noble Order of The Garter which was founded in 1348 by King Edward III.  Holders of the Order are invited by The Queen to attend a service at St. George’s Chapel, Windsor Castle on April 23rd.  The first Knight of the Garter was Edward, Prince of Wales (the Black Prince) who was installed by King Edward III in 1348.